Boundaries and definitions insist further into uncertainty as barely recognizable, yet oddly readable visual fragments of « buildings, pipes, fences and trees » persist with their nearing of the surface of the silver paper used for this publication - only waiting for one’s physical manipulation and exposure to bursts of light to pop out again and back into the world they originally came from. Every tangible interaction with the object is bound to a different interpretation of its reality, depending on settings - revealing the complete abundance of wirings, as well as one more open invitation to recount the fibers of common belief. Negative was shot over negative, resulting in absolute death of the narrator as what already were questionably reliable traces and documents of every day life now get to pick the presentation of their own most intrinsic aspects during their next literal time to shine. The only seemingly stable, conductible thread is a punctuation of physical consequences - such as visible contact sheet perforations; marks that, amidst the chaos, paradoxically protrude as reassuring islands of de facto order and draw grounds for hopes for sense, all the while respecting the openness of perspectives.
Aymeric Nocus 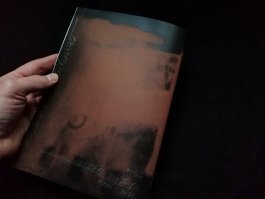