slip silkscreen glow in the dark cover print by Palefroi
Inside risographer, print by We make it, Berlin
28 x 20 cm 48 pages
Edition of 400,
We Make It and Sergej Vutuc, Berlin 2016

.
"On April 29, 1986, instruments recorded high levels of radiation in Poland, Germany, Austria, and Rumania. On April 30, in Switzerland and northern Italy. On May 1 and 2, in France, Belgium, the Netherlands, Great Britain, and northern Greece. On May 3, in Isreal, Kuwait, and Turkey... Gaseous airborne particles travels around the globe; on May 2 they were registered in Japan, on May 5 in India, on May 5 and 6 in the USA and Canada. It took less then a week for Chernobyl to become a problem for the entire world."-
- "The Consequences of the Chernobyl Accident in Belarus"

Čista zona (eng. clean zone) is a story about edge of Europe, field of global economical conflicts. the nations and their boarders, science and meaning of to be or to have...
incl. skaters Valeri Rosomako, Igor Fardin, Tjark Thielker

I have to confess that it has taken me some time to find how to open Čista Zona, but once you've opened it, you dive in a complete "Twilight zone". I also have in mind "Stalker". You drive us in the zone, trying to comply with fear... Each double page is so beautiful that they would deserved a frame.
And the texture of the cover is very interesting. We are used to very smooth cover and the roughness of yours creates a strong attraction. We want to know what's inside, what means this textured cover...
Christer Ek 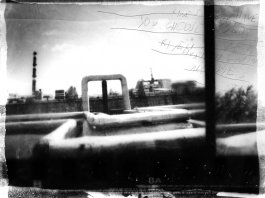