Now introducing the latest collaboration of multimedia artist Sergej Vutuc with Detroit-based lo-fi hip-hop producer Airjob, under the form of this recording of a sound session caught live during one of the 2018 editions of Sergej’s itinerant skate film and art festival: Roundabout. 250 copies of the record have been made, each individually personalized with original artwork resulting from the duo’s joint effort, and comprising ten noise tracks.

Steve Jobs’ words on the failure of Xerox magnetized via the transformer of a photocopier as emitted via a smartphone is a good representation of information transformation with the constant addition of new layers, such as the songs of Amazonian birds entering and passing through, marking just as many more fields of frequency on this one-day recording session that occurred in warm but grey Berlin, during the Winter 2018 edition of Roundabout Film Festival.

The role of the phone is being redefined from the iconic device of the modern individual lost in a position of individualism to one source for Sergej’s reversal of online information, and its transformation into self-built instruments; eventually, words from the likes of Naomi Klein or Yanis Varoufakis echo amidst waves of noise carved into the beats, loops and textures of Detroit-based experimental beat-maker Airjob, whilst on his end Sergej contributes with traditional Balkan sounds, resulting in a clash of appropriations in a background of layers.

Sergej’s first exchanges with Airjob go several years back via skateboarding, visiting Detroit, zine-making and an interest for sound-related artwork. This collaboration now materializes under the form of this package (250 available), comprising the recording of the sound session as well as unique artwork painted over each other’s as for a physical representation of layers.

The owner of the studio was hanging with his kid. It was a cool day, the sun was hiding behind clouds all day. The kid was Playing with toys and reading. Sergej greeted the man and discussed the type of session to get. He looked at me said “half hour ? Hour?” I answered back prolly a hour. Ee split the session and payed him in euro.

We entered the room the floor was black with white lines like a zebra. The walls had foam and there was a small table. Roughly the same size as my 404. While in Berlin visiting Germany i brought a Roland sp 404sx, which is a sampler. I had only owned the 404 for a few months so wasn’t as familiar with it as i am now. I loaded it with bird chirping samples , a couple drums and a few keys.

While we played for that hour after a short ten minute set up, we both explored the new atmosphere our layers were creating.

To the left of me was sergej, the hunched over is hand made noise machine. 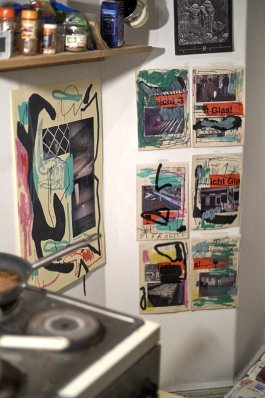